Greece is Nearing Default and Portugal is Imploding

Europe is imploding right now and the US Federal Reserve can only watch and wait. Investors are already pricing in a Greek default, with 10-year bonds hitting a yield of 33%! And while it’s easy to dismiss Greece as the black sheep of the European Union family, there’s also new trouble brewing in Portugal.


The country simply can not any longer compete in a single-currency monetary union. According to the Bank of International Settlements, Portuguese debt is now 479% of their entire country’s GDP!


The Federal Reserve can’t paper over these problems. America’s day of financial reckoning getting closer. Instead of providing a solution, the Fed’s easy money approach — one that continually gets extended out further and further into the future — is a sign of how bad things really are in the Western world.

Posted by Ben Hedenberg at 6:09 PM No comments:

The unsustainable expansion of the public sector

The current death spiral of the Western Wold economies has been caused by promises that no government will be able to deliver on a long term period. The Swedish professor in economy Erik Moberg predicted years ago that the expanding public sector could cause a serious threat to our democracy. The politicians competition for votes are inevitably driving our society to the abyss. The conclusion by Moberg is that favors to particular target groups may be quite profitable, and are more likely to be more profitable in the parliamentary, proportional setting than in other constitutional contexts such as the US presidential constitution with plurality.

Today the work of Moberg and the International Joseph A Schumpeter Society is more important than ever, since several countries apparently are running out of other peoples money that has paid for good welfare gifts to the voter base. Countries like Greece has already run out of funds and states like California are close to experience the same destiny. 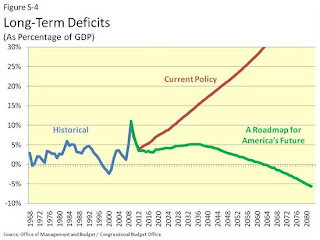 Already in 1992 Moberg proved that Sweden, in spite of rapidly expanding total public expenses, the share of those expenses used for collective goods has, over a long period, and except for the time of the second world war, been fairly constant in-between 3–6%. The balance of public expenses has consequently increased continuously and has been used for individual goods or redistribution of wealth. Moberg suggests that public means are extensively used for buying votes. Sweden has a parliamentary constitution with proportional elections. In such a system parliamentary incentives for discipline are absent. Thats most likely the reason for that Sweden has progressed faster than US. But, although the public sector probably expands more slowly during normal times in the US presidential democracy than in a parliamentary democracy such as Sweden with proportionalism, it may nevertheless be more difficult to reverse the expansion in US.

Even if the expansion of the public sector is relatively slow due to the US presidential constitution with plurality, it is still important to design the constitution with provisions that automatically contain public sector growth. US Congressman Paul Ryan has suggested a cap on total government spending, that establishes a binding cap on total spending as a percentage of GDP at the levels projected to result from this legislation. In addition he has suggested to introduce a discretionary caps, enforced by sequestration, to freeze non-defense discretionary spending. 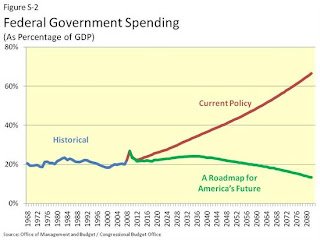 To ensure that the US economy over a long period of time could be strengthen the introduction of direct-democratic procedures like in Switzerland would reduce tax avoidance and lower the level of public debt. It has been well proven that Swiss municipalities requiring that budgets must be approved by a referendum have public expenditures 10% lower per capita than in municipalities where the political class is executing such rights. The the US ideology promoting excessive government levels of spending, deficits, and increasing debt stands in stark contrast to the the ideology with the Swiss municipalities allowing a finance referendum. The peoples referendum municipalities have 25% lower public debt than municipalities governed by the political class. This fact can not be dismissed and is extremely convincing for every individual believing in a limited government.

If no significant amendments will be made to the US constitution the nation will face an almost unavoidable expansion of the governments public sector and inevitably the republic will break down at a point when the big government (public sector) gets impossibly huge. Due to the political competition the US government public sector is always, and almost unavoidably, likely to expand. The basic cause is the majority rule, which makes it possible for the political class to exploit the minority. An introduction of a representative direct democracy with final checks and balances performed by the citizens combined with a cap on total government spending would prevent the present kind of exploitation to occur.

Societies has collapsed before and the most significant was the collapse of the Roman Empire. The breakdown was slow and painful. Some people moved to other regions and others stayed to excise their options. People who stayed turned from white to black markets, and from paying taxes to not doing so at all. When the empire lost its tax-collecting power the defense was week it was no match 476 AD for the barbarian German chieftain Odoacer to push aside the last Roman emperor, Romulus Augustulus, and to install himself as the new authority and liberator of a corrupt and decayed ideology.

Does Americans and Europeans have to repeat the same historical mistakes once again?

Posted by Ben Hedenberg at 11:40 AM No comments:

Why do the Swiss produce more wealth than Americans and Europeans?

Ben Hedenberg
A freer society should be based on a direct involvement of the people and be less dependent on power given to our politicians. Our taxes must be low and fair, so that work and entrepreneurship pay off. Voters must be able to repeal unwelcome political decisions in referendums.